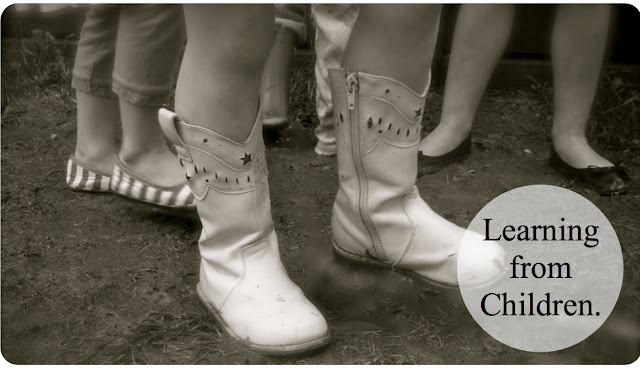 I noticed Maria (3.5 years old) sitting on the edge of the sandpit crying. I went to investigate and asked Maria “Why are you crying?”. Maria was rather caught up in her emotion and struggled to tell me what had happened. Instead she pointed to Emily (5 years old) and Amy (4 years old) who were watching, cautiously from a distance. I asked Emily, “Do you know why Maria is crying?” and with slight guilt in her eyes, she claimed she did not know. Amy then told me “Maria is crying because Emily wants to play with me”. Maria confirmed this was the case by nodding her head when I looked over at her. I suggested to Maria that she could talk to Emily and Amy about this and tell them how she feels. Maria was reluctant to do this but I decided to step back and allow her to come to her own solution. Meanwhile, Peyton (3.5 years old) who had been listening on, became concerned for Maria who was still crying. She approached Maria, gave her a little cuddle and took her by the hand. “Come on Maria, lets go talk to Emily and Amy” Peyton suggested and Maria followed on. I watched for a while as Peyton facilitated a conversation amongst the children, encouraging them all to listen to one another and come to a solution. I heard her point out the tears in Maria's eyes to the other two girls and she asked them "How do you think Maria feels?". Peyton and Emily then invited Maria back in to their play. Peyton, Maria, Emily and Amy then played happily together in the sandpit for the afternoon.

Looking at life, it is pretty clear that as humans we have to work together and whilst we don't always agree on things, none of us are good at everything and we do need each other! So when conflict arises amongst children, as hard as it is sometimes, I try to bite my tongue and encourage them to sort it out amongst themselves (obviously within reason!). After all they are definitely going to require these social skills in life! Janet Lansbury points out that our interruptions ‘put the brakes on valuable social exchanges’ and leave children with the message that they are incapable of interacting with their peers. I try to see conflict as an opportunity for children to learn much needed skills, after all society could do with more citizens who can effectively work together!

I have been challenged lately about the purpose of Early Childhood Education. Is our job solely to prepare these young children for academic learning? I like to think its so much more. Its so inspiring to think that Reggio Emilia's approach was born out of the belief that childhood (particularly the early years) is a time where children's' identity is developed and that this was the time where they could support children in becoming good, valuable citizens of the world.The children we teach are citizens and I believe the purpose of early childhood education is not merely to ready children for school and academic learning but to instill in them morals and skills that will enable and empower them to be valuable contributors in to the world both in the present and into their future.

The idea that children are contributors to their world is powerful, that they too have something to bring and to teach. If children are given the opportunity to have a voice, they really do have a lot to bring, like Peyton who was able to facilitate a meeting with three other children where views were shared, voices heard and problems solved. I think we can all learn a lot from Peyton who is clearly capable of making a valuable contribution to our world.

Posted by Kiwi Teacher at 21:45 No comments: 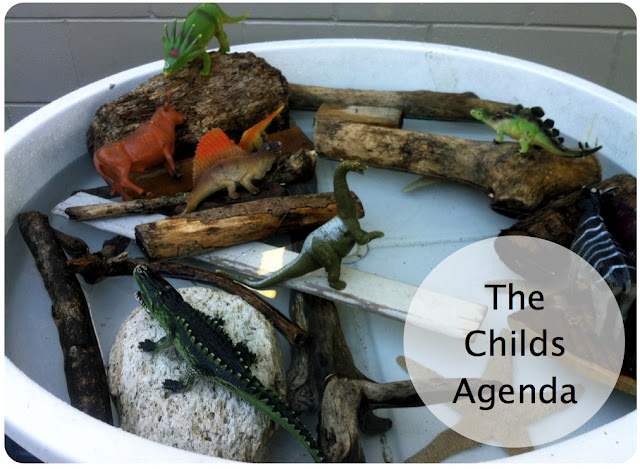 The children have been exploring the concept of sinking and floating lately using the water trough. K came up with the theory that all wooden objects floated which inspired my set up the next day. I set up the trough with as many wooden materials I could find and added plastic animals as a provocation. 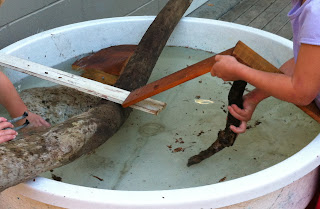 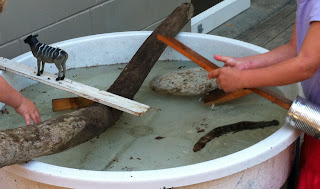 J was the first to discover the provocation in the water trough and I observed him as he began to engage in dramatic play. This was exactly what I expected would happen! J was expressive as he chased the animals around the trough with the plastic alligator, snapping at them and yelling "I'm coming to eat you!". J's older sister T noticed my interest in what he was doing and went to investigate. After observing him for a little while she asked him "can I play with you J?". J was not phased by this and invited her into his play by handing her a dinosaur. T began to chase all the farm animals around the trough with her dinosaur, just like J was doing with the alligator, but it wasn't long before she began to take control. "We need to take everything out of the water now J..." she said and I gulped. I had spent quite a while setting up this provocation which only J and T had explored. However, I stood back and observed. What is T's agenda? I wondered. 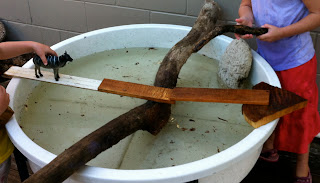 T began to splash around with her hands and then picked up an animal. "Its a swimming pool!" she proclaimed as she threw a dinosaur in to the water. J was unsure about this and stood frozen as if he wasn't sure what T wanted him to do. T sensed this and decided to bring the sticks back in to the trough. J went back to balancing the animals on the sticks and chasing them with his alligator but T now had a different agenda and I observed her closely as she began to balance the sticks on top of each other... "How can I make a bridge?" she asked J. J did not say anything, preferring to continue his play with the animals and T began to build her bridge. T struggled to make the bridge connect from one side of the trough to the other but quickly came up with ideas solutions which can be seen in the photographs...


T must have been working on her bridge for a good half hour before she excitedly told me "It has worked!". I was amazed at her perseverance and the fact that not once did she get frustrated even though the bridge repeatedly came crashing down. Instead she sought solutions and made repairs.

As teachers, sometimes we need to throw our agenda out the window, because more often than not, the child's agenda is so much better! The environment really has acted as the third teacher here and my role was simply to observe and document this awesome learning experience for J and T.

Posted by Kiwi Teacher at 03:40 No comments:

Kiwi Teacher
Hello, my names Elise. I'm an early childhood teacher from Auckland, New Zealand. My personal philosophy is strongly inspired by Reggio Emilia and RIE. I endeavor to provide an environment that is empowering for children by encouraging independence, confidence and a love of learning through play and strong relationships.

Promote your Page too